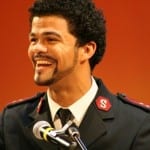 Captain Marion Platt was born and raised in Charleston, South Carolina. Having attended The Salvation Army as a child, he participated in the Adventure Corps (boys’ scouting) Program. After graduation from high-school, Marion quickly enlisted in the US Army, serving 5.5 years as an infantryman in the 10th Mountain Division; he later graduated from Trevecca Nazarene University with a degree in Christian Ministries. After being honorably discharged from the US Army, he met his wife, Everette.

Captain Everette Platt was raised in St. Croix, USVI. She moved to Charleston, South Carolina to pursue a career as an elementary school teacher. Having earned her Masters in Education at the College of Charleston, Everette taught fourth grade for more than ten years. While living in Charleston, she began volunteering with The Salvation Army during the holidays, eventually joining The Army as her church. It was there that she met her husband, Marion.

The Platts consider their marriage, parenting their three children, and their calling to be officers in The Salvation Army their most sacred and important commitments. Marion and Everette are both passionate about the transforming love and power of Jesus Christ and claim Him as their Savior and friend; it is their life’s ambition to be led more by Jesus, lead more like Jesus, and to lead others to Jesus.