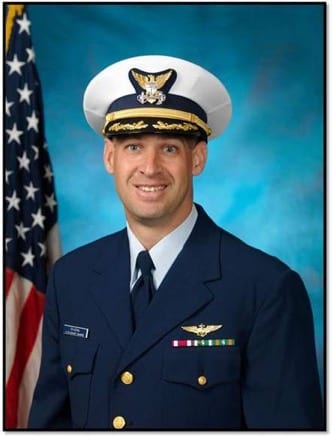 Commander Rivers graduated from the Coast Guard Academy in 1994 with a Bachelor of Science in Government. Following commissioning, he was assigned to USCGC MOHAWK (WMEC-913) in Key West, Florida as a Deck Watch Officer.

After earning his “Wings of Gold” from the Naval Flight School in Pensacola, Florida in April of 1997, Commander Rivers’ initial aviation assignment was to Coast Guard Air Station Miami, FL to fly the HH-65A Dolphin helicopter, where he upgraded to Aircraft Commander and served in both the Operations and Safety Departments. In 2001, he received orders to be a Flight Examiner at the Coast Guard’s Aviation Training Center in Mobile, Alabama. During the final year of his assignment, he was selected to head the Performance Technology Branch where he oversaw the design, development, and implementation of the pilot training curriculum for the fleet transition from the HH-65B to the HH-65C.

In June of 2005, Commander Rivers was assigned to Coast Guard Air Station Borinquen, Puerto Rico serving as a Department Head and Flight Examiner supporting aviation operations throughout the eastern Caribbean. During his tour, he created the Coast Guard’s first ever partnership with the Boys and Girls Club of America, providing after school programs for more than 100 children of Coast Guard, Department of Defense, and other Federal employees assigned to western Puerto Rico.